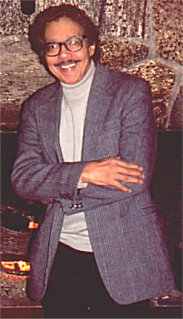 There had been constant delays as a result of the huge volume of traffic between the bus station in Danbury, Conn., and New York City on the busiest day of the Christmas shopping season and now I had to dash 15 blocks so that I could arrive as close to schedule as possible for a 3:45 p.m. appointment at Kennedy’s with Chuck Leonard.

I can still vividly recall listening to him on Musicradio 77 WABC regularly from late 1967 until his final show in November 1979.

Fans from that era can recall the delivery: “WABC Chime Time, 11:22. Chuck Leonard, taking care. Survey night. Number Three in New York, The Foundations.” He always sounded like he was smiling on the air and had the smoothest most personable delivery among the talented All-Americans that helped turn WABC into the most listened to station in the nation..

I darted around pedestrians throughout the run while carrying an equipment bag that contained a camera and audio gear.

As I entered the restaurant I recognized Chuck’s afro as he stood at the bar. We talked over dinner for 30 minutes before taping the interview for musicradio77.com.  Due to no fault of Chuck’s, arranging the interview had been an adventure.

On Apr. 29 2002 I obtained his e-mail address from Allan Sniffen, the webmaster for musicradio77.com, and by the second week of May Chuck and I were corresponding about setting up the session, which would be my first project for the web site.However, by mid-June he wasn’t responding to my messages to arrange a time and place to meet July 9, and that date came and went.

Initially, I gave up any hope of doing the interview. However, while sitting at my computer Oct. 23  I recalled how much I wanted to do the interview and decided to send another e-mail message to Chuck.  Two days later he replied that he had moved some computers at his apartment in Manhattan and his Compuserve line had been down for months.

“To add to the felony, all my files pertaining to you were in Compuserve,” he added. “I’m back up and running and will call you next week.”

On Nov. 11 at 5:25 p.m., my phone rang and the voice on the other end of the line said, “Hi, Chuck Leonard.”  For about 10 seconds I couldn’t believe that I was actually speaking with one of my idols.

Chuck was calling from a car phone as he returned from a trip to visit Diana Joy, his younger daughter and a junior then at Northwestern University in Illinois, who was spending a semester on an exchange program in Spain.  Over about 60 seconds we set a date and time for the interview and he gave me his home phone number. Then abruptly the line was disconnected.About 90 seconds later he called back, saying that he was using a Smart Phone and the person operating it wasn’t smart. He said he had forgotten to provide the operator with a credit card number.

Chuck Leonard was the most insightful person I ever interviewed.  As I replayed the tape through Thanksgiving Weekend, I was amazed at how many keen observations and anecdotes he had provided.

He made me consider the importance of adapting to unforeseen circumstances.

“I have a funny theory about broadcasting,” he explained. “I think everyone has a five-minute radio show in them. Most of them utilize it when they’re behind the wheel of a car.  “They introduce a record at some point as if they were on the air and that is what they would do at that moment,” Chuck added.  “But they don’t think about what they would do when something went wrong,” he said. “What happens when the record doesn’t play, when the turntable doesn’t work, when the thought leaves your head?  “This is what radio is on a daily basis, and I’ve always been able to adapt to that pretty well,” he concluded.

He also noted that he had reached the biggest station in the country by developing a delivery that was “crisp, clean, quick” and “sounded like I knew what I was talking about.”

Since then, whether I’m delivering a power point presentation or leaving a voicemail message, I make sure that its “crisp, clean, quick.”

Chuck also caused me to consider the importance of establishing a rapport with people, even if you meet them briefly.  He said, “You meet people, and whether they’re important to you or not, you don’t know what you mean to them.” It reinforced my belief that role reversal can be important.

I was thrilled when the interview and two of the photos were featured on musicradio77.com over the weeks of Feb. 4 and 11, 2003.

Some time later Chuck returned the 8x10 photograph from the session that I had sent him with an inscription, as well as a typewritten note on a letterhead that included his picture at the top with the logo, “Hello from Chuck.”   The framed photograph is prominently displayed at my home and the letter is in the first folder of one of the drawers of my filing cabinet.

Although we met only once and corresponded just briefly through e-mail and by phone, Chuck Leonard was important to me. 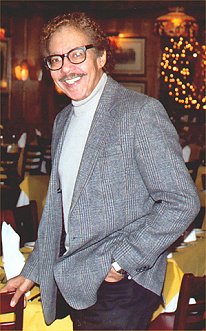