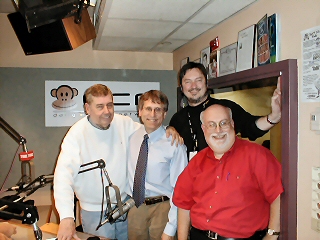 Longtime WABC engineer Frank D'Elia said that although former Musicradio77 night air personality George Michael was noted for throwing tape carts in Studio 8-A, "you will never hear me say a bad word about George."

Frank arrived at WABC in August 1976 as a relief engineer after losing his position due to budget reductions four months earlier at WHN (AM) in New York City, which was then a country music station.

Musicradio77 was in the final throes of its hey day as the most listened to station in the nation.

Frank began his training on the overnight show with air personality Bob Cruz, who had arrived about five months earlier.

However, eventually he did some shifts with George, who had arrived about two years earlier from WFIL (AM) in Philadelphia to succeed the legendary Cousin Brucie.

" 'Did your friend Mozer tell you about me?' " George asked Frank on the first night that they worked together, referring to veteran engineer Bill Mozer, who Frank had known since their days together at WCWP, the campus station at C.W. Post College on Long Island.

"George appreciated that I could be a smart-aleck," he added.

Frank said that they became such a complementary team that George urged WABC's management to hire Frank full-time, even though Musicradio77 and other stations were making an effort at the time to adhere to the Federal Communication Commission's goal of hiring more minorities.

"I probably wouldn't be here today if it wasn't for George," he said in a May 3, 2007 phone interview with Musicradio77.com.

"George was very passionate," Frank said. "He was 110 percent prepared and he expected the engineers to be the same way. He didn't want to see you reading a magazine while you were on the air together."

"He used to say that you shouldn't come across the blue line with your head down," he recalled, making reference to a hockey metaphor used by George, who did sportscasting while at WABC and then went into that field full time in Washington after leaving the station.

"George would make changes at the last moment during the show, and some of the younger engineers were more willing to work with that than some of the older guys," Frank said.

It has been reported that George had strained relations with some of the 36 staff engineers that worked at Musicradio77 during that period.

Frank -who does the engineering each year for WABC Rewound, which will aired this year on May 28 - acknowledged that George received more leeway than the other air personalities at WABC.

He typically missed two shows a week during the winter to serve as a color commentator on the radio broadcasts of the New York Islanders of the National Hockey League. He also did weekend sports casts for Channel 7, WABC-TV.

"I've always felt that a good air personality and a good engineer were better than the sum of two people," Frank said. "We were together in the same room, unlike the situation at other stations. When I was at WHN you were 25 feet away and there was a glass between you."

"If you had worked together you could tell by non-verbal gestures what the D.J.. wanted," he said. "On Saturday night, George was often on the phone with Channel 7 because he would be doing the sports there at 11 o'clock after he got off the radio. I could pick up the slack and you wouldn't know that he had been on the phone that much."

Frank, who arrived at WABC about five years after graduating from C.W. Post, looks back with cherished memories at his work during the Musicradio77 era.

"When I got there in 1976, it wasn't the height of WABC's popularity, but you would drive to work in the summer and hear cars with the windows down blaring away with the station on," Frank said.

"It was a really fun place to work," he said.

"Studio 8-A was the social hub of the floor," Frank recalled. "If you had some free time you would go to 8-A."

For example, he said that if he were not working on a Thursday or Friday night in the late 1970's, he would sometimes drive to Musicradio77 to hang out.

"You wanted to be working near the close of Dan's show because you might get mentioned in the close," he said of the Tri-Fi Drums ending that led to the Six O'clock Report.

He said once on the day after Thanksgiving, Dan closed his show by noting that Frank had lost two of his wheel covers that day while driving on the Long Island Expressway.

Since he regularly did the 4 p.m. to midnight shift in those days, he also worked frequently with former Musicradio77 late night air personality Chuck Leonard.

"You would have some great conversations with Chuck," he said. "Chuck was a fun guy. You never knew what would happen or where he had been earlier in the night."

He also was in the studio with Johnny Donovan - an association that continues today as they work each year on WABC Rewound.

Johnny, the former Musicradio77 air personality is the production director and an announcer for Talk77 WABC, as well as the producer for Rewound. Frank does the engineering each year on the 12-hour show.

"Johnny had to be everybody, because in addition to doing early afternoons for a while and doing weekends, he was the utility guy," Frank said. "Sometimes when he was filling in for George I had to remind him that George did things a certain way."

"I'm surprised that he still talks to me all these years later," he said with a laugh.

"He's very humble, and I think he is underestimated by himself and by the people at WABC," Frank said. "He has a legacy of taking care of things for 35 years."

"He was just telling me yesterday that there were two people at the top - Brucie and Dan - then there was Ron, Harry and George and then the rest of us," Frank said in a reference to Musicradio77. "I told him that I disagreed. I told him that he had a knack to be able to fill in anywhere and make the sound consistent with that part of the day."

"I'm the first person that gets to listen to the show," he said regarding his work on WABC Rewound. "Right now I'm about halfway through this year's show and I'm enjoying it."

"I can remember putting on leader tape the first years of Rewound and now it is all digitized, which shows how much technology has changed since the show started in 1999," said Frank, who also writes the instructions for the engineers that are on duty each Memorial Day when the show airs.

"I think the show is also a testament to the listeners," the engineer said regarding the air checks that have been submitted. "They thought enough of WABC to tape the shows. I think at some stations you would be lucky if you had four or five hours of audio."

Frank said that they have received more tapes of some air personalities than others.

"When you were 15 years old you probably didn't tape Harry or Ron because you were in school while their shows were on the air," he said regarding morning air personality Harry Harrison and mid-day air personality Ron Lundy. "If you were 12 years old and you were up at 10 o'clock at night you would tape Chuck Leonard."

Frank said he became interested in a career as a radio engineer while earning a bachelor's degree in Music at C.W. Post.

He had to take a "distribution" of classes in a related area. His choice of Radio and Film led to work at WCWP, the campus station, which through the years has produced such notables as Rita Sands, the former ABC News correspondent and anchor at WCBS Newsradio 880; and Ted David, formerly of ABC News and now with CNBC.

Frank said he worked at a variety of functions at the campus station and over time became friends with its chief engineer, Bill Mozer, who also worked at Musicradio77.

He said that Bill invited him to join him at work one day in 1969.

He got to observe him working on Dan Ingram's and Cousin Brucie's shows.

"Right then, I said to myself that this is what I wanted to do," he said.

Frank also became friendly with another engineer from WCWP, Bill Epperhart, who began working as a relief engineer at WABC in May 1971.

In 1977, Bill, who later worked at 66 WNBC (AM), was largely responsible for Frank meeting his wife, Susie.

They now live in Mineola, Long Island and have three children - Billy, 25, who is an assignment editor with Fox News; and twins Kenny and Krissi, 20, who are both attending college.

Musicradio77.com web master Allan Sniffen has stated that Bill Epperhart, who died in 2000, was the first former WABC employee to contact him and provide materials after he established the web site a decade ago.

Frank said that engineering has changed during his 31 years at WABC.

"Everything was regulated years ago," he said. "We did everything. Right before I got to WABC, there even had been a grievance filed by one of the engineers because a D.J. had operated a cough switch and he was saying that he should do that because it was part of the microphone."

"There were hundreds of carts in studio 8-A with music, jingles, commercials," Frank said of the system during at Musicradio77. "There was a lot of activity."

"Now I go to a commercial break on the Gambling show and it's the last thing that I do for five minutes because the computer does the work," he said, making reference to John R. Gambling's weekday talk show from 10 to 11:45 a.m. "It has become less labor intensive."

Frank said it was sad to experience the decline of Musicradio77 through the late 1970s and early 1980s before the format changed to talk.

"Here was WABC that had produced a lot of profits that helped support the ABC network, and now it was as though WABC was the station being pulled along by WPLJ," he said, referring to the ABC FM sister station in New York City.

"It was unfortunate that it had to end," he said. "They had ratings even at the end of the music days that even 10 years later the station would have killed for."

However, ABC executives felt that some of the network's AM stations would be better off over the long run by going to a talk format.

"You almost wondered what was going on in the sales department in those final years of music," Frank said. "You would look at the log some nights and there were hardly any local commercials."

He said that WABC Rewound and the Saturday Night Oldies Show that began in December 2005 are examples of the impact that Musicradio77 had during its 21 and a half year run.

"If you took a group of people that are now in their 50s and grew up in the metro New York area, they would be able to sing the WABC jingles," he said.

"People think of where they were and what they were doing when they hear Rewound or Saturday Night Oldies," Frank said. "They can be 16 years old again."

"It's like Ford bringing back a version of the '60s Mustang," the engineer said. "People remembered what it was like to be in that car and Ford had sales that went through the roof."

Frank said that he's pleased that he's had the chance to spend more than three decades at the station.

"Some of the engineers that were here during the music days moved on to ABC television or to network radio," he said. "I always wanted to be with WABC, because it's my station."