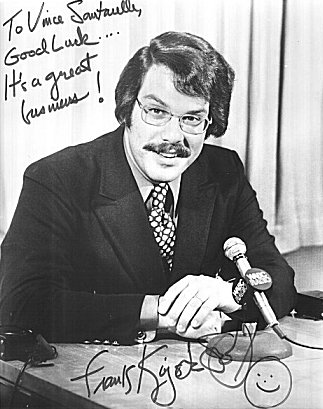 Frank Kingston Smith, who was known for sophisticated, adult sound that he delivered on his fill-in and weekend shifts at WABC from 1971 to 1974, said he believes over time one of the emerging satellite networks will establish a “fun, personality station” like Musicradio77.

“Any radio that you pay for, I hate,” he said in an Apr. 9, 2004 phone interview from his home in Scottsdale, Ariz. “But if you’re going to pay $10 a month for a subscription, I think they should develop, a fun station like WABC, with personality.

“I think that’s going to happen, but it will probably take five years,” Frank added.  “I think these networks should come up with a live, seven days a week channel with personality Top 40 radio,” he said. “If they came up with something like WABC, I would be there tomorrow.

“Unfortunately, you now have people who have been out of high school for 10 years who never heard personality radio,” Frank continued regarding the demise of that programming around 1991. “That’s sick.”

He said the profession could use more programmers like the late Rick Sklar – who directed WABC during its hey day when about 8 million people listened to it each week.

“Rick Sklar was the smartest program director that I have ever known,” said Frank, who has been off the air for 11 years and now regularly does voice over work for such clients as Blue Cross and Blue Shield and announces air shows across the country. “He hired the right people and then he left them alone.

“In three years at WABC, he only went over one air check with me and that was because I had commercials for two different department stores running together,” he added. “But we had so many department stores on that hour, that it was hard to avoid that.”

“He also would take care of his guys,” Frank added. “If there was someone ranking on them, he would take their side, and people would complain about the darnedest things.

“He was a disc jockeys’ programmer, not a sales department programmer,” he continued. “Some program directors are frustrated former sales managers or frustrated general managers.”

When Jim Nettleton left in the spring 1971 after a year and a half of doing the fill-in and weekend shifts, Sklar had Julian Breen, the assistant program director, do air checks in Philadelphia, where Nettleton had worked at WFIL, before coming to Musicradio77.

“The theory was that you went back to the market where you found your last hire since there would likely be a lot of talent to choose from,” Frank said.

He said Breen, who worked at WABC from 1968 to 1971, mostly recorded air personalities at WFIL, where Frank had worked when he returned to his hometown in 1966. However, he recommended to Sklar that he hire Frank, who was then working for WIBG, which was a Top 40 station that competed with WFIL.

“Philadelphia has historically been big for music radio because it was the center of Rock & Roll with the recording companies, American Bandstand and some of the air personalities, who date to the 1950’s,” Frank said.

After Breen’s trip there, Frank “got a call on a Saturday morning in May, 1971, at 9:05 from a guy with a namby, pamby voice, saying that he was Rick Skuh- Lar.

“Rick always said his name as two syllables,” he recalled.

“He asked if I wanted to work for him, and I hung up,” Frank continued. “He called back 30 second later and after I still didn’t believe him, he gave me the phone number for WABC and told me to ask for Rick Sklar’s extension.”

Frank, who grew up in the Main Line section of Philadelphia, left Penn State briefly in the 1960’s to play guitar for the band he was in. They regularly earned $300 to $400 a night, a good sum at that time for a local band, and even played in Las Vegas in 1962.

However, he grew tired of being on the road.

“I gave up the band because I am so much of a home person that I couldn’t stand that life,” Frank said. “I wasn’t interested in all of the travel.”

He returned to Penn State and on the recommendation of a friend began working at WMAJ, a commercial outlet in College Station, the town where the university is located. He earned a bachelor’s degree in Journalism with a minor in History from the school.

His father, a longtime criminal attorney in Philadelphia, began flying airplanes in 1955 and went to serve as the executive director of the National Aviation Trades Association and write 16 books on aviation and more than 1,000 articles, including a regular column in AOPA Pilot. He died in 2003 at the age of 84.

Frank and his brothers – Doug and Greg –  all are pilots.

“I never wanted to be a kids’ jock,” he said of his one the air persona. “The people who make rock and roll are usually in their 20’s and 30’s and the people who handle the promotion of the records are usually even older, and that’s a lot like the audience.

“I always felt that I was not talking to kids, but talking to adults in the third person, invisible,” Frank said. “If the kids also listened, then fine.”

Apparently, a larger percentage of the kids listened when he did the Saturday 10 p.m. to Sunday 3 a.m. shift following Bruce Morrow.

Frank sometimes would have the switchboard operator forward song requests to the studio.

“You had a lot of kids who would be coming back from a movie or being in the back seat, and a guy would call and after making the request he would ask me to wait at least two minutes to play the song since he had to get back from the pay phone to the car where his girl friend was,” he recalled.

Some nights he got calls from Florida, Texas – even Australia.

Frank said Sklar told him “to be myself” and never sought to have him alter his style much when he was substituting for any of the regular air personalities.

He said working at WABC with its short play list “was an adjustment partly because you only had 14 hits in the rotation, six pick hits, some album cuts and lots and lots of oldies. If you had a week when 11 of the 14 songs on the survey were ballads, you had to do some creative programming so the audience wouldn’t fall asleep.”

Frank said the weekly survey “was mechanical, because it was based on the sales from 300 stores, and then a random 50 would be used for the survey to ensure that some record promoter wasn’t going to a store to buy 100 copies of his song just to boost its rating on the survey.”

He said the engineers who ran the control board for him “were superb and fun to work with.

“Having the engineer in the same room was terrific, because, for one thing, you didn’t have to push a button to talk to them,” Frank added regarding the console, which had the engineer and the air personality working together rather than having to communicate through a glass window in separate studios.

In particular, he recalled Bob Ryan, who was in his early to mid 20s and had detached retinas in his eyes making him almost blind.

“He had to hold the carts up to his eyes and read them letter by letter to figure out which was which,” Frank said of Ryan, who later became a state senator in Nevada.

“He timed everything out to the point that it was a Bob Ryan show,” he added.

Frank said his closest friends at WABC were Harry Harrison, Dan Ingram, among the air personalities; Ryan, Jerry Zeller and Bill Epperhart, among the engineers; and newscasters John Meagher and Bob Hardt.

“I thought that Dan walked on water,” he said of Ingram, who had the longest tenure of any of the personalities during WABC’s more than 21 years as a music station. “He would do something funny that would be almost spontaneous, and then throw it away.

He succeeded Nettleton as the host of Retro Rock, a three and a half minute show on the American Contemporary Network that ran at 10:25 p.m. The show reviewed some of the highlights of the rock era. He was a co-producer of the show, which ran until either 1973 or 1974.

“Yes and no,” Frank said when asked if Retro Rock was ahead of its time – since through the decades other shows have surfaced on rock history. He noted that WRKO presented the “History of Rock & Roll” documentary shortly before that. He was the narrator for that production.

Frank said he left WABC to work at WHDH in Boston in May 1974 because he was going through a divorce and “had to get away to re-establish my life.”

Also, he wanted to be a morning personality and “knew that Harry Harrison would be there forever.

“They gave me a raise, took me to dinner and gave me a pep talk, but I was set on going back to Boston,” he said regarding efforts by Sklar and management to keep him at Musicradio77.

He worked in the Boston market off an on for about 21 years.

“I got too really like the city because it is friendly and comfortable,” Frank said. “I go back once a year and I find myself at least once each time giving someone directions.”

Frank said he has some objections to current radio programming.

“It’s so regimented today,” he said. “I have friends all over the country who are in radio and in management, and they even say that it seems to be that you have the liner cards and a clock. It’s as though everything is computerized.

“In contrast, I can remember on my first show at WABC, I said the call letters of my old station on purpose, just to get that out of the way, because I knew it was going to happen and I wanted to get it behind me early on,” he added. “On WABC, you could entertain people and have a more loose style.”

Frank said he is opposed to some of the recent decisions by Federal Communications Commission regarding appropriate content.

“People complain about the shock jocks, but the greatest strength that people have over these shows is to not listen to them,” he said. “That’s why you have a hand and a dial. If no one listened, then they couldn’t be on the air.

“I don’t like Howard Stern,” he added. “I think he’s an embarrassment. But he obviously has an audience, and he has the right to do his show that way. There shouldn’t be interference from the FCC.”

Frank said that in 1991 he decided to move to Scottsdale, Ariz., during the depths of the recession to have a change of scenery.

In addition to doing voiceovers on commercials and announcing air shows, he assists Linda Zvara, his wife, with Showline Promotional Products, her business venture.

According to a WRKO web site, over the years he has had acting roles – including portraying an attorney in “Against The Law” on Fox; appearances in five episodes of Spencer – For Hire; and parts in the movies “Primary Motive” and “Malice.” He also has appeared in several television commercials.

Frank said he’s not surprised by the continuing popularity of oldies stations.

“People of my mindset don’t like rap or hip hop,” he said. “They wish the new music was like it was 30 years ago.”

Frank also is a fan of www.musicradio77.com – noting that he receives e-mails every time one of his air checks is posted on the site.

“What a great station it was,” Frank said. “Every time I hear a WABC jingle on that web site, I start to get goose bumps.”

Frank Kingston Smith has his own web site:
FrankKingstonSmith.com