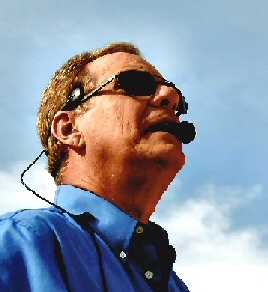 Former Musicradio77 WABC  utility and weekend air personality Frank Kingston Smith, who has been a licensed pilot since 1967, said that he is losing interest in announcing air shows which he has been doing across the country for 31 years.

Frank succeeded Jim Nettleton, who had worked in Philadelphia immediately before joining WABC in October of 1969.

Frank has long been noted for his sophisticated, adult sound and air presence.

He said in an April 2004 phone interview with Musicradio77.com that he left WABC in the spring 1974 because he was going through a divorce and needed to move away from New York City.

He spent the better part of the next two decades as an air personality in Boston.

They want to hold the air shows longer so that people will spend more money while theyre there, Frank said in a Mar. 7, 2008 phone interview with Musicradio77.com from his home in Scottsdale, Ariz. They now want to go from 9 a.m. to 5 p.m. It used to be a three or three and a half hour show.

I dont think that most people want to be there that long, he said. Its like a football game, they want to come and be entertained for about three hours. Anything longer than that becomes a test of endurance.

His father, a longtime criminal attorney in Philadelphia, began flying airplanes in 1955 and went on to serve as the executive director of the National Aviation Trades Association and write 16 books on aviation and more than 1,000 articles, including a regular column in AOPA Pilot. He died in 2003 at the age of 84.

Frank and his brothers Doug and Greg all are pilots.

He said the arrangements for the air shows are becoming more formal.

It will never go back to doing a job on a handshake, said Frank, who became the 201st member of the International Council of Air Shows in 1978. He said the organization now has more than 5,000 members.

He said the pressure associated with the longer shows has caused some deaths among pilots who have taken risks that were far less common some years ago.

It has caused people to do things faster and closer to the ground without leaving room for error, Frank said. People are losing friends.

There are just so many things that you can do in an airplane, he said. There are, after all, laws of physics.

Frank began announcing the air shows in 1977, when he was an air personality in Boston. He said that he didnt take a vacation for many years because he would use his allotted off-time to be available periodically each year to announce a weekend air show.

He said that the shows require a lot of preparation, noting that he does research on the participants and tries to add some local anecdotes.

Fortunately, Frank said, he went from 1993 until 2007 without announcing a show or air race where there was a fatal crash.

However, he said it is happening more frequently at shows.

There are plenty of great things going on at the air shows, but people are focusing on the planes that hit the ground, Frank said regarding the fatal accidents. Thats what makes the headlines.

Some years ago, I was doing a show in Daytona and we had our headquarters at the motor speedway, he said. In one of the offices there, the walls were plastered with photographs of crashes in the stock car races. There is something wrong with that.

Frank said he isnt announcing as many air shows as in the past or doing as many voiceovers, and, instead, is devoting more time to assisting his wife, Linda Zvara, with her business, Showline Promotional Products, which is based at their home in Arizona, where they have lived for the last 15 years.

He announced an air show in Yuma, Ariz. in February and at the time of the interview was scheduled to do shows later in 2008 in Corpus Christi, Tex. and Reno, Nev.

Frank said he has been doing voiceover work for so long that he is now collecting, at age 65, retirement benefits from the Screen Actors Guild and the American Federation of Television and Radio Artists.

He said that he still has some of the same criticisms of radio programming now that he had in the early 1990s after he left the profession following a long stint in Boston.

I still get angry every time I think about how they have killed personality radio, Frank said of the programming constraints that have been imposed over the years.

They seem to go to five minutes of commercials, and I dont want to listen through that, Frank said regarding how some terrestrial stations conduct their programming.

He also said that he has reservations about satellite radio.

Satellite radio is supposed to go with you wherever you go, so youre hearing the same air personality if youre in New York or Atlanta, he said.

I liked the way it was years ago, when in different cities, you have different personalities, its not all the same, Frank said. Each city had a distinct sound.

Frank Kingston Smith has his own web site:
FrankKingstonSmith.com