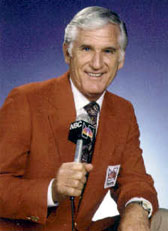 “The conventional wisdom was that you could not run on the Baltimore Colts,” he said of the historic game that he and color commentator Sam DeLuca, the former Jets offensive guard, called on Musicradio77 WABC from the Orange Bowl in Miami on Sunday, Jan. 12, 1969.

However, Merle, who is now retired and living in Texas, noted that Jets fullback Matt Snell gained 121 yards on the ground that day, most of it at the right side of the Colts defensive line.

“People asked the question later as to why Cleveland hadn’t tried that in the NFL Championship Game,” he said.

Just two weeks earlier the Colts, who were 13-1 in the regular season and had defeated the Minnesota Vikings in the first round of the NFL playoffs, blanked the Cleveland Browns, 34-0, in the NFL Championship Game.

At the time, the Browns had the fleet Leroy Kelly, who led the NFL in rushing in both 1967 and ’68 and had topped the league in touchdowns each year from ’66 through ’68.

Kelly gained 1,239 yards on the ground during the ’68 campaign and finished his career with 7,274 yards in rushing, which helped get him inducted into the Pro Football Hall of Fame in 1994.

Yet, the Browns’ offense was stymied throughout the NFL Championship Game, even though the team had defeated the Colts, 30-20, two months earlier – the only regular season loss that Baltimore suffered that season.

“Some of the Colts defensive players were older and the Jets were able to use their foot speed to mount a rushing attack,” Merle said in a Dec. 6, 2008 phone interview with Musicradio77.com, just 37 days before the 40th anniversary of one of the most discussed games in pro football history.

“I think Weeb recognized that the Jets had more foot speed,” he said of the veteran Jets head coach Weeb Ewbank, who had steadily built the team into a winner after taking over in 1964.

Snell scored the only Jets’ touchdown of the day as the team utilized a steady offense of rushing and of short passes by Namath, who completed 17-28 of his throws for 206 yards, in the 16-7 victory, which marked the first time that an AFL team had won a Super Bowl.

The AFL champs also capitalized on the four interceptions they had against Colt quarterbacks Earl Morrell, who was named the NFL’s Most Valuable Player that season, and future Pro Football Hall of Famer Johnny Unitas, who held the record for most yards completed in a career when he retired following the 1973 campaign.

“Neither Morrell or Unitas were the quickest quarterbacks to have back there,” said Merle, who indicated that Morrell’s subpar play, which led to Unitas being inserted into the lineup in the second half, was partly due to the pressure that the Jets defense put on him when he tried to pass.

“Both of them were in the late stages of their careers,” he said of the Colt quarterbacks.

Morrell, who had been a journeyman and would later start for part of the season on the undefeated 1972 Miami Dolphins team, had become the starter early in the season after Unitas was injured.

“I think that Super Bowl III, to some degree, changed how Don Shula did things,” Merle said of the legendary Colts coach, who was just 38 when his team made Super Bowl III.

“With the Dolphins No-Name defense, Don put more of an emphasis on foot speed,” he said regarding the unit that helped the Dolphins win two Super Bowls in the early 1970’s.

Merle also credited Namath with calling an intelligent game as the under-regarded AFL came of age that day.

Through his early years, one of the criticisms of Namath, who had been signed to an unheard of contract of $427,000 following the 1965 AFL draft, was that he tried to throw too many passes instead of attempting to develop a more balanced attack.

The AFL was noted during its run from 1960-’69 for high-scoring games, which steadily generated more fan interest.

However, in ’68, Namath threw less frequently, had fewer interceptions and the Jets finished with an 11-3 record.

“Joe recognized defenses very well and he attacked with the running game to the right side of the Colts’ defensive line,” said Merle, who became the play-by-play broadcaster for the Jets in 1964 on Musicradio77 WABC and stayed with the team through 1972, although during his last two years the games were carried on WOR-AM in New York City.

“Joe knew the Jets could win a low-scoring game,” he said.

Merle said that Ewbank was noted for developing effective defenses.

One of his assistants that year was Buddy Ryan, who became one of the highest-profile NFL assistants of all time when he served as the defensive coordinator of the 1985 Chicago Bears team that went 18-1 and captured Super Bowl XX in January 1986.

Merle said that at that time coaching staffs were limited to five or fewer assistant coaches, unlike the huge assortment assistants that became common by the early 1990’s when head coaches started to sometimes more resemble the chairman of the board.

He said that Ewbank also “had great relations” with the Jet players.

Merle said that Jets place-kicker Jim Turner “was the unsung hero of that game” since he booted three field goals, which, in effect, was the difference.

“He didn’t have the range that the soccer-style kickers had, but he was a very accurate kicker,” he said of Turner.

Merle also said that even though Namath had become a celebrity, his teammates didn’t resent him.

He said that when he went to the Jets hotel that week, defensive back Earl Christy shook him because he was so excited that Joe had announced at the Touchdown Club that he would “guarantee” a Jets victory even though the Colts were prohibitive favorites.

“I think that Joe’s prediction helped the Jets win the game because it got his teammates hyped,” Merle said.

Even though Snell was the game’s leading rusher and scored the Jets only touchdown, Namath was named as the Most Valuable Player of Super Bowl III.

“The quarterback has an advantage in a vote like that,” Merle said regarding the higher profile that a signal-caller usually carries. “I think it would have been fair to make them co-MVPs.”

“There was pandemonium in the locker room afterwards,” Merle said regarding the reaction after Namath walked off the field waving a finger in the air to symbolize that the Jets were number one.  “I don’t think that they blocked anyone from coming in. The Jets’ owners had foreign dignitaries that were in there.”

A record album of the Jets 1968 season was produced a short time later that was narrated by Merle and included some of the calls that he and Sam had made over the 16-game schedule.

The Jets win put an exclamation point on the AFL’s quest to gain parity with the more-established NFL.

To some, the Jets represented the youth movement that had become prevalent in the late 1960’s as rock music and pop culture took on a higher profile.

It also turned Namath into an even bigger celebrity and led to a series of endorsements.

Merle has said that there was a crossover between the Jets’ radio audience and Musicradio77 WABC’s Top 40 format, since at the time Namath was the biggest rock star around.

The day after the game on his ABC American Contemporary Radio morning sports commentary he said that many people will tell you in the coming years that they knew the Jets were going to win just as there are many people who will tell you that they were at the Polo Grounds when the New York Giants’ Bobby Thomson hit the home run heard round the world in 1951.

“I don’t think so,” Merle said when asked if the Jets had been lucky and would have lost a majority of the games if the two teams had played 10 times.

“The Jets had found out how to beat them with foot speed,” he said.

“I think to some extent that Shula and the Colts felt embarrassed by that game, and I didn’t think that was fair,” he said. “They didn’t lose by very much, and if they had won the perception would have been much different.”

The Jets only outgained the Colts 337 to 324 in total yards from the line of scrimmage.

The four interceptions, two of which were made by defensive back Randy Beverly, became important components in the Jets victory.

Merle said an often overlooked aspect of the game was that if the Colts had won, they would have finished the season 16-1 and would today probably be favorably compared to such storied teams as the 1972 Dolphins, who went 17-0; the 1985 Chicago Bears, who finished 18-1; the 1989 San Francisco 49ers, who also finished 17-2; and the 2003 and 2004 New England Patriots, who had consecutive 17-2 seasons; the 1978 Pittsburgh Steelers, who also were 17-2, among other championship squads through the years.

Some observers felt that the Colts might have won the game if they had used Unitas earlier, since he led the team to its only touchdown late in the fourth quarter.

“I think that Unites inspired the Colts that day,” said Merle, who also has been acclaimed for his baseball broadcasting, including being rated by sports broadcast historian Curt Smith as the 32nd best baseball broadcaster of all time.

Over a span of roughly 40 years he did games for the Kansas City Athletics, Milwaukee Braves, Minnesota Twins, Milwaukee Brewers and Texas Rangers.

“But you can’t argue with keeping Earl Morrell in the game as long as he was in, because he had carried that team during the year,” Merle said.

The veteran sportscaster also said some observers have indicated that the Colts might have fared better if they had given the ball more to fullback Tom Matte, who picked up 116 yards on just 11 carries.

His 10.5-per carry average is still the highest in Super Bowl history, according to Wikipedia.org.

“Matte was one of the best overall athletes that I had seen,” Merle said of the former Ohio State player, who filled in at quarterback in some late-season games in 1965 for the Colts after Unitas and reserve signal-caller Gary Cuozzo went down with season-ending injuries.

He said that he is surprised that the Jets have not returned to the Super Bowl in the 40 years since the Namath guarantee.

Merle said that, in particular, the teams that Walt Michaels coached in the early 1980s and the 1998 team that was directed by Bill Parcells came close to making it to the title game.

“The Jets will get there again,” he said. “But I don’t think that you will ever have the kind of circumstances that surrounded Super Bowl III. The Jets victory for the AFL changed pro football.”