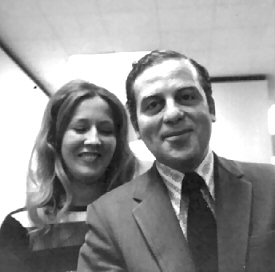 But you probably didn't now Linda Meilan's name.
She too had a long career at WABC and has
some terrific insights about her time and the people at the station.
Thanks to Scott Benjamin for the interview!

Linda Meilan, who came to Musicradio77 WABC straight from college in 1963 and who was with the ABC network until 1986, said that Scott Muni, who was the evening air personality when she arrived was a charismatic figure and “one of the best-looking men that I ever saw.”

“You wouldn’t want to talk about a book with Scott, you would want to talk about music because he followed it very closely,” she said of the longtime New York City air personality, who left WABC in August 1965 and then spent many years as one of the top FM announcers in the Big Apple.

"Scott was effective in using double entendre’s in his ad-libs on the air, as was [longtime WABC afternoon air personality] Dan Ingram, but it sometimes was a little more sexual than what Dan used,” Linda recalled during a Sept. 23, 2006 phone interview with Musicradio77.com from her home in Pompton Plains, N.J.

She lauded Rick, saying that he made intelligent decisions that made WABC the top-rated station in New York City for years.

“Of all the program directors through the years at WABC, he was the one who was totally in charge and had the most clear idea of what he was doing,” said Linda, who was a beloved figure at WABC for many years.

“Most of the time the general manager was someone from sales that knew nothing about programming, so Rick really had free reign to program the station,” she said.

Linda worked in programming in the 1960s, primarily as an assistant for some of the non-music operations, such as Howard Cosell’s Speaking of Sports commentaries and his weekly Speaking of Everything interview show.

“He was smarter than the television program directors of today, because he didn’t make the error of moving shows all the time,” she said of Rick.

Instead, Harry Harrison was hired from WMCA and stayed until November 1979, when Dan Ingram replaced him.

Dan returned to the afternoons in the spring 1981. Al Brady, the program director who made those decisions in 1979, has stated to Musicradio77.com that putting Dan in the morning didn’t work out as well as the station had hoped.

Some observers have said that with all of the traffic and weather coverage in the morning, it gave Dan less room to operate. However, he had been successful as the morning air personality in other markets in the 1950s before coming to WABC in July 1961.

Linda said that Rick’s emphasis on short play lists and a small music rotation helped boost WABC to the top of the ratings.

She also said that as a result of watching colleagues at WINS implicated as part of a payola scandal in the early 1960s, “Rick was very paranoid about payola.”

“He went to great lengths to make sure that it wasn’t going to happen at WABC,” Linda said.

She said that Rick was “kind and fun-loving” but also had a “vindictive side” that she partly attributed to being in a job where “you always have to be watching your back.”

Linda said that some of the air personalities would “play games” through practical gags on Rick.

She said that for a while Dan Ingram would snip some string from the pull on the light in the program director’s office and after a while Rick thought that he was shrinking as he had to reach higher to reach the string.

Linda said veteran midday air personality Ron Lundy said that went Rick established a system with color-coded music carts, Ron told him that he couldn’t distinguish between them because he was color-blind.

Regarding Howard Cosell, Linda said that she enjoyed working with him, partly because he had a “brilliant” mind and was a strait-laced person who was devoted to his family.

“He gave some of the athletes free legal advice and then would get an exclusive interview with them,” she said of Howard, who was a lawyer before entering broadcasting at age 37.

“I would write a summary of someone’s book and he could read it once, throw it in the trash and then do a brilliant interview for Speaking of Everything,” Linda said of the interview show that ran for many years on Sunday nights on ABC’s American Contemporary Network, including WABC.

She said that she wasn’t surprised that Howard continued to do his radio commentaries and Speaking of Everything well after he became established as a television personality on ABC’s Monday Night Football.

“It was his home, the place where he got his start,” Linda said of his association with Musicradio77 WABC.

“He also believed in the radio medium and felt that it wasn’t as artificial as television,” she said.

Linda - a native of Butler, N.J. who has a long interest in the theater - applied for a position at ABC after graduating with an associate’s degree in Communications from Centenary College in Hackensack, N.J.

“I went through the broadcasting companies and ABC was at the beginning of the alphabet,” she said with a laugh.

Linda said although Herb Oscar often read The New York Daily News while the music was on the air, the sales department was concerned when he left the station in 1968.

She said that the salesman feared that some advertisers might leave since they wanted Herb’s live reads of their commercials.

Herb said in a June 2005 phone interview with Musicradio77.com that he left WABC after nearly eight years because of the acid rock that was being played on the air and a desire to spend more time with his family.

However, Linda said that Herb asked Don Curran, the general manager at the time, for several consecutive weeks of vacation.

Don, who had been in promotions and programming before becoming general manager, knew that such an arrangement could create discontinuity and hurt the ratings.

“Herb said he was going to quit, and Don asked him when his last day would be,” Linda recalled.

She said that Herb’s immediate successor, Harry Harrison, who had been the midday air personality on rival WMCA, boosted the ratings for the morning show over the following years.

“Harry was the nicest person but was a little nervous on the air,” she said, noting that she ran the control board for his show during a strike by the technical engineers.

She said of the air personalities, that Dan Ingram was the most intelligent.

“Dan could talk about anything,” Linda said.

However, she said that when she first met him, he was overweight and didn’t maintain a tidy appearance.

Linda said those factors changed after he married his second wife.

“I loved Chuck,” she said longtime WABC late-night air personality Chuck Leonard. “He was like the friend you had in high school that was really cool and you wanted to hang out with.”

She said that she became friendly with one of Chuck’s girl friends and the three of them and Chuck’s mother took a brief vacation together in Las Vegas.

In her early years at WABC, Linda said she worked on some of his remote broadcasts that Brucie did at Palisades Amusement Park, which closed in September 1971.

“I’m a Jersey girl, so I miss Palisades,” she said of the large amusement park that advertised regularly on WABC.

Regarding the sales department, Linda said that Larry Wynn “was the best broadcasts salesperson that I ever saw.”

Larry had several accounts, including the famous commercials on the overnight show for Dennison, the men’s clothier in Union, N.J.

“He was a very charismatic person who had been in Vaudeville years ago and had written music for Broadway plays,” Linda said of the reasons why Larry was so successful in sales. “He also gave me the best advice when he said that when you’re selling radio time you are working for both the station and the advertiser. You want to service the advertiser’s needs because you want them to continue to do business with the station.”

“You could make a fortune in sales in those days at WABC,” she said. “The people in corporate saw that he was making the ninth highest amount of money at ABC, so they cut back on the commissions rather than having Larry Wynn teach, for example, the television salespeople how to improve their sales. Their logic was crazy.”

After Linda’s first husband was killed in an accident, WABC morning news anchor John Meagher and his wife, Sally, consoled her, and eventually she dated their mutual friend, WABC news reporter Gus Engleman. They married in the mid-1970’s.

Gus had come to WABC in the late 1960s after covering the police beat for the Journal American, which became the World Journal Tribune before he went out of business.

“He loved to cover politics and crime,” Linda said of her late husband. “He was very smart, very animated, very funny and loved New York.”

“He never got over the Dodgers leaving Brooklyn and continued to root for them when they went to Los Angeles,” he said.

“He never could have become a reader-writer because of his Brooklyn accent,” she said. “Besides he didn’t want to be in a news room all day. He wanted to be on the street covering stories.”

Later, after WABC became a talk station, Gus was hired as the director of public relations for the Jacob Javits Convention Center, which is named after the former U.S. senator from New York state.

“I don’t think he was initially particularly interested in public relations, but he did enjoy it,” Linda said.

After leaving WABC, Linda worked on research and sales systems for the ABC owned and operated FM stations. She stayed with the network until 1986, when she became an account executive with NBC radio.

She later was national sales manager for WOR radio in New York City.

Today Linda does volunteer work for her church and frequently attends Broadway shows.

“I came to New  York City years ago to become a theatrical actress, but I got caught up in broadcasting,” she said.

“I think a lot of the young people working at WABC in the 1960s and early 1970s thought that this must be the way radio is everywhere,” Linda recalled. “We probably figured everyone had 20 shares and every radio at Jones Beach and the beaches on the Jersey shore was tuned to WABC.

“Those jingles that were on the air just stayed in your head,” she recalled. “There was a subliminal message there.”

“I don’t think there ever will be a radio station like that again,” she said, noting that WABC at one time had 8 million listeners a week. “It all came along at the right time.”

“If it had been the 1950s, it would have been too early because there wasn’t enough good music then,” Linda said. “By the mid-1970s, you could see that FM was having an influence. The 1960s and the early 1970s were the right time for a station like WABC.”