Mike McKay was a DJ at WABC from 1979 until the station became a talk station in 1982.
He then continued at WABC providing voice over work until 1984.
Today he's part owner (and morning man) of KVLC-FM in Las Cruces New Mexico
and conducts a voice over business from his web site!

Scott Benjamin interviewed him for Musicradio77.com on March 11, 2006 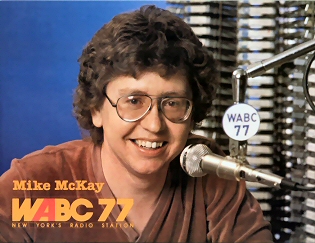 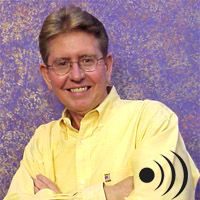 Former musicradio77 WABC air personality Mike McKay said the best training he ever received came in a conference room that was about a two hour drive from the Avenue of the Americas.

He was about to start work in 1977 as one of the air personalities at WTIC-FM in Hartford, Conn., which was making the conversion from playing the classics to becoming a swingin’ rock station.

In a conference room in the Insurance City, Mike Joseph, a consultant who had worked in a similar capacity with WABC when it became a Top 40 station 17 years earlier, conducted, in effect, a seminar on how to appeal to a mass audience.

“There were stop watches and we got unbelievable training,” Mike McKay recalled in a Mar. 11 phone interview with Musicradio77.com. “It was like radio school.

“I would air check myself every day,” he said of his career as an air personality and staff announcer. “It came from the training from Mike Joseph.

“You listen to yourself,” Mike McKay said regarding the benefits of regularly listening to air checks. “You critique yourself and discover that you can do more of this and less of that.

“I listen to some of my old air checks now and I’m not pleased with some of them,” he continued. “I’m not as tight as I could have been.”

While he was working a WTIC-FM, Mike sent some of those air checks to Rick Sklar, who after a highly successful tenure as the program director at WABC was now a vice president with the ABC radio network.

“Even though he was a legend, he was always approachable and took the time to listen to tapes and wrote back and would take my calls,” he recalled.

After a relatively late start, Mike’s career was moving at Internet speed.

A career as an air personality was only “in the back of my mind” when he was listening to Cousin Brucie on WABC while attending Brooklyn Prep, which he graduated from in 1964.

“I wasn’t like other kids who had little radio stations in their basement,” Mike said.

He left St. Anselm College in Manchester, N.H. in the late 1960s and joined the Navy. He eventually graduated from St Anselm in 1972.

After discovering that he didn’t want to continue his career as an analyst with the U.S. Life Insurance Co., he attended radio school on the G.I. Bill and landed jobs with two AM stations in Pennsylvania before joining WTIC-FM.

In 1979 Rick Sklar recommended Mike to Al Brady, who had succeeded Glenn Morgan, a longtime aide of Rick’s, as WABC’s program director.

WKTU-FM had finished ahead of WABC in a recent New York City ratings book and Al faced huge challenges as the station continued to lose listeners to FM stations that offered stereo.

Mike had been in contact with Jack Miller, who was then the program director at WCBS-FM in New York City, but didn’t receive a job offer.

At about the same time, Al Brady called on a Friday and then again three days later and shortly afterwards Mike was hired at WABC at double the salary he had been making at WTIC-FM.

His first show was Friday, Nov. 9, 1979, and he spent his initial weeks working overnights, before Sturgis Griffin was on the air in early December. Mike also worked Saturday mornings. A short time later he was doing both the Saturday morning drive and Sunday afternoon shifts.

Over the 18 days after his first show the station would release high profile air personalities George Michael, who had been doing the evenings since 1974; Harry Harrison, who had been in charge of morning drive since 1968; and Chuck Leonard, who had worked late nights and weekends since 1965.

“It was called the Thanksgiving Massacre,” he said regarding the changes near the holiday. In fact, Al Brady has stated in a letter posted on Musicradio77.com that he chose to inform Harry of his dismissal the day before Thanksgiving since he had reason to believe the news media was about to publish that decision.

In addition to Mike and Sturgis, night-time air personality Howard Hoffman was hired in late 1979.

Mike said he “didn’t feel much pressure” even though he arrived right before the loss of three popular longtime air personalities and WABC was steadily declining in the ratings after enjoying unparalleled success through the late 1960s and most of the 1970’s.

“It was tough for Al,” Mike said, noting that the program director faced a situation where the expectations were high and there was little chance of short to moderate term success.

“I was disappointed to see him leave,” he added.

Mike said the other air personalities at WABC were very supportive.

“The nicest guy in the world was Ron Lundy,” he said of the longtime mid-day air personality who was noted for saying, ‘Hello, Luv’ to his listeners.

“He went out of his way to make me feel like part of the team,” Mike recalled.

It was during this period that he met his idol of his high school years, Cousin Brucie, at an industry event at the New York Hilton.

“He saw my name tag and reached out and said, ‘Mike McKay. I’ve heard you on WABC and have been wanting to meet you,’ ” Mike said of Brucie, who by then had been away from WABC for several years and was at the time the owner of a group of radio stations.

“He was so gracious and it was terrific the way he turned the tables on me,” he said. “I think the way he makes other people feel important is part of his genius.”

Mike acknowledged that “AM radio and music were parting their ways” by the late 1970s.

However, he disagreed with a statement in the “Top 100 Of The Year” section of Musicradio77.com that, “Barbra Streisand and Bruce Springsteen on the same station don’t work too well,” regarding some of the play lists from 1981.

He said the broad range of music being played in the early 1980s wasn’t any different than, for example, 1968 when the station would play “Summertime Blues” by Blue Cheer and then follow it with “Honey” by Bobby Goldsboro.

Mike continued working nights, overnights and weekends until WABC switched to a talk format on May 10, 1982.

“It was much more a corporate decision,” Mike said of the change in formats. “WABC was still making money, but there was a trend toward talk at the ABC stations.”

“Talk has become successful at WABC, but I think that a lot of people forget that it took years for the talk format to produce even the worst numbers of the music format at WABC,” he said in reference to the success that WABC has had with such high profile talk show hosts as Rush Limbaugh and others over the more recent years.

As was the case with longtime WABC air personalities Dan Ingram and Ron Lundy, Mike expected to start work in early July 1982 on Super Radio – the satellite network that ABC was planning to launch.

Reportedly because of a lack of advertisers, the project was scrapped. Some observers have said that it was an idea that was ahead of its time.

Instead Mike worked as an ABC staff announcer from mid-1982 until 1984.

In the mid-1980s, he briefly hosted Nighttime America for the RKO network, and  during the following years was an air personality at stations in Salt Lake City, Indianapolis and Detroit.

Mike and his wife, Nancy, have lived in El Paso, Tex., since 1997, where Mike has a voiceover business. The couple has a daughter, Erin, who recently graduated from the University of Wisconsin.

Most notably, Mike has been the voice for the Hasbro “Star Wars” toy commercials.

Mike said that he believes that the oldies format is still viable even though some major markets no longer have a station with that format due, in part, to concerns about the demographics of the oldies listeners.

“Over the last 15 years program directors and companies have talked about the demographics,” he said. “I think there are an awful lot of younger people who listen [to the music of the 1960s and 1970s] because their parents, who lived through that era, had it on with the oldies stations in the 1980s and 1990s when the people that are now in their 20s and 30s were growing up. That has regenerated interest in the oldies.”