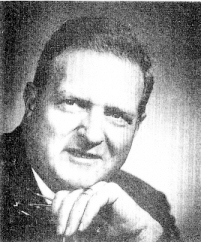 CNBC Business Radio senior anchor Ted David was an 18-year-old page at ABC in New York City in 1967 when he became acquainted with the network's staff announcers, some of whom were better known for their work in other venues.

"I would call Fred Foy, 'Fred,' " he said of the former announcer of radio version of The Lone Ranger who would become the announcer for The Dick Cavett Show.

"But with Milton, it was always, 'Mr. Cross,' " he said of the voice of the weekly Texaco Metropolitan Opera radio broadcasts. "There was a reverence."

"For the first four years I would call him 'Mr. Cross,' and he would say, 'Call me Milton,' " former ABC staff announcer and longtime voiceover artist Joel Crager said in an Aug. 7, 2006 phone interview with Musicradio77.com.

"And I would reply, 'Yes, Mr. Cross,' " Joel said of Milton, who was the announcer on the Metropolitan Opera broadcasts for 43 years. "He was a very charismatic person."

"In the studio, the place would get quiet when he came in," recalled Maury Benkoil, the former national program director for ABC radio, where Milton did network newscasts as well as newscasts for WABC AM and FM, station identifications and commercials. "He was loved at ABC."

"I don't think that Milton ever knew how much his voice meant to people," Fred Foy said of the impact of Milton's work on the opera broadcasts.

The New York Daily News reported in 1975 that through the 120 commercial and 90 college radio stations that carried the broadcasts it was estimated that they had an audience of 12 million people.

Milton stated in a 1961 commentary that, "The majority of our listeners, by far are plain, average, American folks who have never attended an operatic performance but who have made acquaintance with it and come to love it entirely through radio. That the number of such listeners extends into the millions is the richest and most encouraging reward possible."

"I could hardly imagine a year without these Texaco-Metropolitan Opera broadcasts," he added. "In the beginning they seemed far-fetched; Saturday matinee audiences in the Opera House seemed to regard the radio equipment as an invasion of their private province. But gradually the idea of sharing the Metropolitan's performances on a vastly larger basis did take hold. Today the broadcasts have indeed become a public trust, one of our national assets."

The New York Daily News reported that he would open the broadcasts by saying, "Good afternoon, opera lovers from coast to coast."

"The first time I heard Milton Cross broadcasting from the Metropolitan Opera House was when I was still in high school," former ABC staff announcer Allan Jefferys stated in an Aug. 2006 e-mail message to Musicradio77.com. "He introduced me to the joys of opera in such an easy manner I became a regular listener."

"It was a religion to people," said Barry Tucker, whose father, Metropolitan Opera singer Richard Tucker, was a friend of Milton's and occasionally had lunch with him. "People set their dials to the station in their area that carried the opera broadcasts."

"He was one of the most uncomplicated and least temperamental men I have known in my personal and professional life," stated Geraldine Souvaine, the producer intermission features for the Texaco-Metropolitan Opera Radio Network in a 1975 tribute. "Over the years, he has been 'Uncle Miltie' to me. This goes back to a nickname he acquired early in radio. I believe it was on a program called The Children's Hour."

"Cross had a reputation for self-control to the extent that a young associate during his ABC days said: "The first time I heard him curse, it was like finding out your kindergarten teacher smokes," according to a 1975 story in the Philadelphia Inquirer.

"He was a sensational guy, who told great stories and was very friendly, even with young people," Barry Tucker said in an Aug. 23, 2006 phone interview with Musicradio77.com.

"He took a genuine interest in us and would ask us about our sports teams," Barry said regarding the interaction that he and his two brothers had with Milton.

"He came and went and did his job as though he was the janitor or the mailman," Ted David recalled in an Aug. 3, 2006 phone interview with Musicradio77.com.

"He didn't have an inflated ego," he added. "You could judge him by how kind he was to the little people."

One day Ted mentioned to Milton that he had heard his voice on an Arid deodorant commercial.

"It was just yesterday or today," Ted said.

"Thank you, very much," Milton said.

Milton, who knew that the commercial had gone off the air some time earlier, discovered that his agent had agreed to air another series of the commercials and was taking the fees that were to go to Milton.

Some time later Milton walked up to Ted and gave him an envelope with $50 in it - a reward for making him aware of his agent's unethical behavior.

Imdb.com reported that during his 43 years with the Metropolitan Opera, Milton missed only two broadcasts -when his wife, Lillian, died in 1973.

A bio provided by Jeff McMillan of the archives department at the Metropolitan Opera, stated that Milton started his career at WJZ in Newark, N.J. as an announcer-singer in the 1920s, just a short time after radio became established.

The Philadelphia Inquirer reported in 1975 that Milton discovered radio after a girl friend invited him to visit a friend of hers who "had a crystal set and used to listen to the voices and music broadcasting from a tiny transmitter in Newark."

He was the host of "The Chamber Music Society of Lower Basin Street," a show that was a launching pad for Dinah Shore and Victor Borge, according to an ABC Announcers brochure provided by former ABC Information Radio network anchor Bob Gibson.

Milton began doing the opera broadcasts on Christmas Day 1931 on a performance of Hansel and Gretel and was the only announcer that the Metropolitan had over the next 43 years.

"Regardless of how he felt or his schedule, he went to do his announcing at the opera," Maury Benkoil said in an Aug. 2, 2006 phone interview with Musicradio77.com.

"He was an absolute expert on the opera," Maury said of Milton, who wrote books on the topic. "You could ask him about any opera and he would know the answer to the question."

Former associates say that he also was very devoted to ABC.

Maury recalled walking down the stairs at the network headquarters in New York City one day in the early 1960s and seeing Milton sitting and weeping because the announcers' union was threatening to go on strike.

"He asked about how he was going to exist if there was a strike," Maury said.

Ted David said there were times when Milton - the suave, golden-voiced announcer from the big opera house - would sound out of context while reading a promo for ABC television.

"You would hear him say, 'Bullwinkle Moose, in color,' and somehow it didn't seem to fit," Ted added.

An excerpt of Milton reading a Canada Dry commercial is included in the ABC Staff Announcers Reunion tape that Bob Gibson assembled. That montage is posted in the Sound Files section of Musicradio77.com.