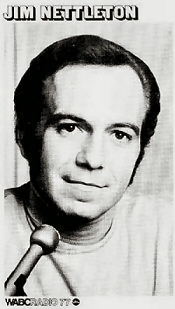 “Philadelphia is very loyal town,” he said regarding the nation’s fourth largest city during an Apr. 16, 2004 phone interview.

“It is a small town in some ways, because so many natives stay in the area and it is a city with neighborhoods where people get to know each other,” added Jim, who currently does a Saturday show at WOGL, an oldies station in Philadelphia. “There are people at the club nights that I go to now that I’ve been seeing for decades in Philadelphia.”

He said WABC had approached him in the summer 1969 about doing the overnight show, which Charlie Greer was vacating after more than eight years at Musicradio77.

“It didn’t pay much more than I was making at WFIL, so I thought it was a bad trade off where I would have to work more hours and read Dennison commercials every three and a half minutes,” he said of the clothing store commercials that were widely used on the overnight shift during that era.

In the meantime, WABC made a second offer to Jim to do fill-in and weekend work and he left the much-heralded WFIL in Philadelphia in October 1969 to join Musicradio77.

“It was the station that everyone was looking at,” he said of WFIL, where future WABC personalities Frank Kingston Smith and George Michael worked before coming to The Big Apple.

Jim, who currently lives in nearby Cherry Hill, New Jersey said that part of the reason so many talented air personalities worked on the Philadelphia Top 40 stations was that WFIL “had a prototype format.”

Also, rock music became almost as famous in Philadelphia as the Liberty Bell.

Jim also noted that there were 64 notable rock recording artists who grew up within 16 blocks.

“No other city has come close to having that much rock music talent,” he said.

In addition to his air shifts, Jim hosted Retro Rock, a three and a half minute show on the history of rock and roll that was being launched on the American Contemporary Network each night at 10:25.

“It was actually ahead of its time, because not many people were examining the history of rock at that time,” he said.

Regarding his regular shifts -which were from Saturday at 10 p.m. to Sunday at 3 a.m. and Sunday from 4 to 9 p.m - Jim said that WABC, like other Top 40 stations of that era, relied heavily on oldies  “because the weekends were a more carefree time when people could concentrate on radio rather than just using it as background noise.”

Jim said he left WABC in May 1971 after George Williams, the general manager, said he had breached his contract by doing voiceover work for WCAU-FM in Philadelphia. He has continued to live in that area and had commuted to New York City during his year and a half at Musicradio77.

He said he had received verbal permission about a year earlier from Rick Sklar, WABC’s program director, to do the work, but realized that he should have gotten something in writing.

“I was obviously upset over it, but you understand that things like that happen in this business,” Jim said. Frank Kingston Smith, who was then working at WIBG in Philadelphia and previously had been at WFIL, succeeded Jim about a month later.

Shortly after leaving Musicradio77, Jim was hired by WPIX-FM in New York City and worked there for about a year.

“It was a Top 40 station that was similar to WABC, but the format wasn’t quite as tight,” he recalled.

He said he continued doing the voiceover work for WCAU-FM and didn’t experience any resistance from the management at WPIX.

In 1974, just three years after leaving WABC, Jim was named by Billboard as its program director of the year for his work at WCAU-FM.

He said one of his role models has been the late Charlie Parker, who he worked for at WDRC-AM in Hartford, Conn., from 1963 to 1966.

“He was brilliant,” Jim said of Parker, a beloved figure who was named by Billboard as its program director of the year in 1975. “He was a talented writer who created contests that were copied across the country.”

Jim said he started his career in radio as an undergraduate at WRSU, the campus station at Rutgers University in New Jersey. He had enrolled to become a civil engineer, but headed in another direction after he was invited to do a show at WRSU.

Although he has spent most of his career in Philadelphia, there have been several other stops.

For a while in the 1990s he was at WDAE in Tampa, Fla., which suited his lifestyle since he was able to play golf “three to four times a week.”

In addition to his Saturday show at WOGL, he currently is on the air Monday through Saturday from 10 a.m. to 3 p.m. at WARX in Maryland – an Internet station.

Jim said he believes radio is moving toward satellite and Internet outlets.

“The advance in technology is so immense that it is not that expensive anymore to have satellite stations or to receive a station over the Internet,” he said.

“The satellite stations appeal to people partly because they don’t have any commercials,” Jim added.

He also said he’s not surprised that the music of the 1950’s through 1970’s remains popular.

“I think the nostalgia began with the Nader shows in the 1970’s,” he said of the rock performances sponsored by promoter Richard Nader.

“When I do club nights there always is a cross-section of ages,” Jim said. “You find the people 27, 28 years old who listen to the ‘50s music, for example, and know the lyrics.”