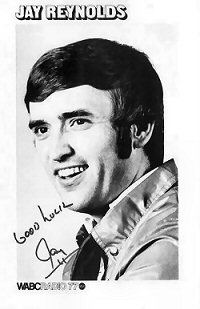 The famed Cousin Brucie, the former longtime evening personality at the station, recently said that he thinks of Charlie Greer when discussing the all-night show that stretched from midnight until 6 in the morning.

However, Charlie, who was one of the members of the original WABC air staff in Dec. 1960, had two stints as the mid-day air personality during his nearly nine years at Musicradio77.

Jay did the all-night show for six years - not only the longest consecutive tenure during the station's 21 and a half years with a music format, but nine months longer than the combined time that Charlie spent on the all-night show during his two stints, according to the air schedules posted at Musicradio77.com.

Brucie said in a recent phone interview that he had thought that Jay had only been at Musicradio77 for two years.

Former WABC morning air personality Harry Harrison said in a Feb. 20, 2007 phone interview that the reason that people most remember Charlie as the all-night air personality might be because he was the first one to read the six live commercials per hour for Dennison.

Dennison, the men's clothier on Route 22 in Union, N.J., used commercials that, as Musicradio77.com has stated in the Sound Files section, were "specifically written in iambic pentameter. . . just like Shakespeare."

The commercials stated that their store was open from 10 a.m. until 5 the next morning and that "Money Talks, Nobody Walks."

Jay was well liked by his fellow air personalities and was noted for his enthusiastic delivery and colorful ad-libs during the midnight to 6 a.m. shift.

After Charlie left WABC in August 1969 for a position at WIP in Philadelphia, Roby Yonge, who had arrived at WABC about 20 months earlier, took over the all-night show.

However, after his contract wasn't renewed he went on the air with the famous rumor of Beatle Paul McCartney's death.

Legendary WABC program director Rick Sklar yanked Roby off the air and had Les Marshak, who was primarily a staff announcer at the time, take over the remainder of the show in the wee hours of Tuesday morning of Oct. 21, 1969.

Les, who continued doing the all-night show, said in an Oct. 22, 2005 phone interview with Musicradio77.com that Rick went over a couple of his air checks with him and he had the impression that he might get the show permanently.

However, Les said that one day in Feb. 1970 Rick called him to say that he didn't need to come in that night.

On Feb. 23, 1970 Jay took over the show, which still included the live commercials for Dennison. Actually, less than a year after Jay arrived, Dennison added a second store at 250 West 57th Street in Manhattan.

As Les has said, parts of the Dennison commercials didn't make "literal sense."

Jay - who arrived at WABC after generating huge ratings as the afternoon drive time personality on WIFE-AM, the market leader at that time in Indianapolis, according to www.reelradio.com - would continue doing the overnight show through Feb. 26, 1976.

Former WABC program and operations director Glenn Morgan stated in an article for Musicradio77.com that he and Rick, who was his boss at the time, thought that the station needed more energy between 5 and 6 a.m., immediately before Harry Harrison's morning drive time show.

The decision by Rick and Glenn not to renew Jay's contract led to the hiring of Bob Cruz, who sounded like Dan Ingram and from November 1979 until April 1981 took over WABC's afternoon show when Dan succeeded Harry as the morning drive time personality.

Perhaps part of the reason that Jay, who lived in New Jersey during his tenure at WABC, is not that well-recognized for someone who spent six years at the most listened to station in the nation is that unlike many of the other all-night air personalities during WABC's hey day, he never worked on a higher profile shift.

Big Joe's Happiness Exchange occupied the overnight hours during the first year and a half that WABC was a music radio station.

Then Bob Lewis became the air personality of what he called " the all-night satellite" on June 16, 1962. Of course, he later worked weekends at WABC, had a show on WABC-FM and then worked at other FM stations in New York City and became a highly regarded voiceover announcer.

Charlie Greer had fairly long stints as the midday air personality and Roby Yonge - who, as mentioned earlier, briefly succeeded Charlie starting in August 1969, was the early afternoon air personality for roughly a year before he did weekends and then the all-night show.

A short time after Roby was abruptly dismissed from WABC, he was on the air at WCBS-FM, before it became an oldies station.

Ron Lundy took over the all-night show in September 1965 but began a long stint as the WABC midday air personality that following spring.

Bob Cruz in addition to moving to afternoons following his work on the all-night show, later became the announcer for ABC's 20/20 and was in demand as a voiceover announcer.

After his four-month tenure working overnight, Les Marshak quickly landed a position at WPIX-FM in New York City and some years later became one of the top voiceover announcers - handling such accounts as Macy's and NBC Sports.

However, Jay arrived at WABC from Indiana and returned to the Hooiser State after his last show at Musicradio77.

Reports indicate that he worked at stations there over the next 20 years. He died in March, 1996.

Some of his former colleagues recently offered some comments about what Jay was like on and off the air.

Jay Reynolds was a very pleasant, friendly type of personality on the air and off.

He was a devoted family man and was happy and excited to make the move from the Midwest to New York.

When I think of Jay, I think of the candle burning story. It was a long time ago, but this is what I remember.

As I opened the door to the WABC studio that early morning where Jay was in the final minutes of his all night show, I was greeted by a very strange sight.

Jay was at the microphone, his engineer was on the board and there were others in the studio, which was very normal.

What was unusual was the sight of two lit candles burning on either side of the console.

I asked what was going on and Jay said it was the annual WABC candle burning ceremony.

Jay told me that he had a memo from Rick Sklar telling him to watch the candles and log the time when they burned out.

I realized that it was gag, but I didn't want to spoil it. I asked Jay if he was sure. He showed me a memo with Rick's signature. Then Jay said he didn't know what to do because the candle was still burning and he had to get to the airport to meet a plane. I think that he said that his mother-in-law was coming in from out of town for a visit with the family.

I told him to go and that I would watch the candles and would log the time that they burned out. He was very relieved and grateful and when his show was over he hustled out the door.

As the studio door closed, loud laughter erupted from everyone. Yes, he did fall for the joke, as we all may have done at times. However, the next day when he found out that he had been punked, as they say in television these days, he laughed with everyone and congratulated the pranksters on their success.

He wasn't upset or angry. He knew it was all in fun. I think that tells you a lot about him, too.

When Jay left WABC, I heard that he returned to Indiana and was very successful on the air and in radio station management. Some years ago, I was very sorry to hear of his passing.

Jay was another super WABC personality who was a pleasure to know and to work with.

"Jay was a private guy," Brucie said. "He didn't hang around a lot with other people at the station, so I never got to know him well."

"However, I found him to be very nice and very polite," he said.

"I think regarding the candle incident that it was either Ron [Lundy] or Dan [Ingram] who got some of Rick Sklar's stationary and wrote the memo that he had to report when the candle went out," Brucie said.

"The candle had different marks on it noting that it had reached a certain level," he recalled. "It was from a promotional kit that had been sent to the station."

"What we were doing was trying to get at Rick Sklar through Jay, since he was the new guy," Brucie said. "The instructions on the memo said that Jay was supposed to call Rick at home as soon as the candle went out."

"When he found out, Jay was a gentleman about it," said the longtime air personality, who now is on the air Wednesday and Saturday nights at Sirius 6.

"It doesn't seem like Jay was there for six years, which is a long time," he said. "I would have thought that it was only two years."

Jay was one of the most likeable people I ever knew in radio. Very low key, always a sparkle in his eye, and just pleasant to spend time with.

WABC was about egos and one upping each other. But not Jay.

As you know, I have been very involved in flying shows, air shows, for 32 years. This past year I lost my best friend in an accident which is yet to be explained. Not air show-related, but flying on a mission for the DOD.

I hated it, having been with him two weeks before, then doing the eulogy at his memorial in NorCal two weeks later. I miss a lot of people, but Jay was very near the top of the list with Chuck Lischer.

"He loved being a d.j.," Tom said of Jay. "He also appreciated being at a station like WABC."

"Jay was easy to work with," the former engineer said. "He also followed the rules more than a lot of the air personalities, who sometimes tried to bend them a bit and tried to be avant-garde at times."

"The all-night shift wasn't easy because of long hours, and in the early years all the Dennison commercials that he had to read every hour live," Tom said. "You also tended to have on that shift some of the engineers that were more difficult to deal with."

He said a story circulated in the early to mid 1970s that Jay went to the rest room during a newscast during the wee hours of the morning and when he returned there was dead air on WABC because both the engineer and the staff announcer doing the newscast had fallen asleep.

"Even though he was busy doing the show, he would ask questions about me and we would talk about the other engineers," Tom said. "He was personable."

"Jay was very tight in his work - even talking through the jingles, which everyone knew anyhow because they were played so much, and then going into the musical introduction for the next song," he said. "He also was very good at explaining to an engineer what he wanted to do next."

"He would use some colorful one-line comment once and then not use it again," Tom said. "The next time that song played, he would say something else for the intro.

"Jay also didn't have a signature phrase, like Dan Ingram with, "Hey, Kemosabes," he recalled. "He also didn't use cliches."

"He would be experimental at times in his ad-libs," Tom recalled. "Sometimes you weren't sure what he meant."