"Roby on Roby"
by Scott Benjamin 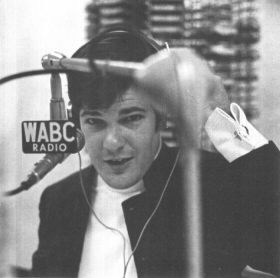 Roby Yonge Behind the WABC microphone
(1968)

Roby Yonge arrived as a DJ at WABC just when the station hit its stride as the most listened to radio station of all time.
If not for that amazing timing, Roby might not even be remembered for his relatively short time in New York.
But... he was at the right place at the right time to become a name that Musicradio WABC fans remember well.

Scott Benjamin interviewed Roby's godson, Roby Sherman.  Roby Sherman's father, Bob Sherman was a
good friend of Roby's... so much so that he named his son after him!

Musicradio77.com reporter Scott Benjamin caught up with Roby Sherman for some recollections
of his famous namesake's career!

The godson and namesake of former Musicradio77 WABC air personality Roby Yonge has assembled anecdotes, audio and photographs on a web site in an effort to, in part, show that the "Big Kahuna" should be remembered for things other than just his famed dismissal for airing the rumors of Beatle Paul McCartney's death.

"I do think that a lot of people fixate on that and become polarized," said Roby Sherman, whose father, the late Bob Sherman, was a roommate with Roby Yonge for a while when Roby was one of the most popular air personalities in Miami, playing to the surfer crowd on WQAM, and Bob served as the station's photographer.

"I think that it's a shame that some people focus just on the Paul McCartney incident because there are so many stories about Roby beyond what happened that night," he said. "He also was a very nice person."
In the wee hours of Tuesday, Oct. 21, 1969, Roby Yonge, who was just weeks away from the end of his contract with WABC, broke the station's format as he aired rumors about the death of the famed Beatle, who, according to sources, had died in 1966 and been replaced by a look-alike.

His career apparently had been in decline for months.

Roby Yonge, who was 25 at the time, arrived at Musicradio77 WABC in December 1967 after amassing impressive ratings at WQAM and a third place finish in a most handsome d.j. contest that was sponsored by a teen magazine.

He filled -in for longtime WABC air personality Charlie Greer one snowy overnight a short time before Christmas, and, according to Musicradio77.com, later did Ron Lundy's midday show for two days in late December 1967.
He officially started doing the 1 to 3 p.m. shift on New Year's Day 1968. He was situated between Ron Lundy and Dan Ingram.

Roby Yonge's official start coincided with the more music era at WABC, as the station eliminated The Breakfast Club and the long weeknight Newscope.

The late Julian Breen, who served as the station's assistant program director from 1968 to 1971, said in an Apr. 1, 2005 phone interview with Musicradio77.com that within six months the station had rocketed to the top of the New York City ratings.
To promote Roby Yonge's hiring, the stationed aired a commercial, voiced by Dan Ingram, that invited listeners to send in a photograph or drawing of what Roby Yonge looked like.

Dan told listeners that Roby's mother would not be able to enter the contest.

Julian Breen has said that Roby Yonge also frequently was aboard an armored car that delivered the gifts in the Double Prizes contest that began in September 1968 in which Musicradio77 WABC brought a prize to an address that was randomly selected from the phone directory or from the post cards that were submitted and if the recipient knew what the prize of the day was, he would receive two of them.

However, Julian has said that Roby Yonge had poor interpretative skills, particularly in his production work, and that he never understood why Roby was hired. He added in the 2005 phone interview that Roby didn't get much respect from other personnel at the station.

Roby Yonge's tenure as the early afternoon air personality ended in early 1969 and he very briefly did a 45-minute show after the Six O'clock Report until Cousin Brucie came on the air at 7 p.m. on weeknights.
He was then shifted to the early Sunday show and later succeeded Charlie Greer during the second week of August on the overnight show.

According to Wikipedia.org, the Paul McCartney rumors started when air personality Russ Gibb of WKNR-FM in Dearborn, Mich. (the Detroit market) mentioned them on the air Oct. 12, 1969.
Reportedly there were clues on some of the Beatles records - in particular Revolution #9 in which, if played backwards, there was a lyric that said, "Turn me on, dead man."

Wikipedia.org reported that the rumor "gained momentum" after Roby Yonge began speaking about it on the air that fateful morning - just two and a half months after he had started doing the overnight show.

During the late night and early morning hours Musicradio77 WABC's signal reportedly reached 39 states and some foreign countries. Roby's comments on the rumors prompted a huge volume of calls to the station's switchboard.

After being contacted by someone at the station, WABC program director Rick Sklar summoned Les Marshak, a staff announcer who had been doing some of the newscasts on the overnight show, to the station and arrived at studio 8-A with a security guard, who was armed with a pistol, as he took Roby Yonge off the air.

Roby Sherman said that Roby Yonge apparently remained intrigued by the rumors of Paul McCartney's death, noting that the air personality asked his father to review photographs that he had taken of the Beatles arrival in the United States in 1964 to see if they matched later photographs of McCartney.

He said in the early 1980s, Roby Yonge and Bob Sherman met with a professor at the University of Miami in Coral Gables to research whether the rumors were true.

Les, who had won a talent search contest that the station sponsored in 1961 and later did reports on high school sports on Scott Muni's and Cousin Brucie's shows, had been aspiring to become an air personality at WABC.

He completed Roby Yonge's show and continued as the overnight air personality until Feb. 1970, when Jay Reynolds became the permanent successor. Les proceeded to work at WPIX-FM, where he stayed until 1977, and for decades has been a premier voiceover announcer for several major clients.

According to Musicradio77.com's section on the WABC air personalities, Roby Yonge resurfaced a short time later at WCBS-FM, about two years before it adopted the oldies format, and was responsible for adding some oldies to the station's play list at that time.

He then returned to Florida, spending the following years working at radio stations in the Miami area and also doing television commercials and voiceovers.

"He typically would stay at a station for one to three years," Roby Sherman said.

Roby Yonge died of an apparent heart attack in July 1997, just a week before he would have turned 55 years of age.
In 2003, Roby Sherman established a web site at Homepage.mac.com/tikmac/moof/robyyonge/, in part, to provide stories about Roby Yonge's life beyond the controversial broadcast on the Paul McCartney rumors for which he is most recognized.
The web site also can be easily found by doing a search through Google.

Anyone with memorabilia or anecdotes on Roby Yonge can contact Roby Sherman through e-mail at roby.sherman@mac.com.

The web site includes anecdotes about Roby Yonge and photographs from the mid and late 1960's taken by Bob Sherman of Roby surfing in Miami and frolicking on the beach with young women in bikinis. It also includes the front page of a Miami newspaper from December 1967 in which Roby Yonge wrote his farewell to his Miami listeners.

It also has air checks from some of Roby Yonge's shows at Musicradio77 WABC and audio from interviews that he did in his later years.

In addition to his work for WQAM, Bob Sherman, who died in 2002, did free lance work for Time, Life and the Associated Press and for a while was the personal photographer for the Bee Gees.

As Roby Sherman, a software engineer, moved his mother to Denver to live near him, he came across many of his father's photographs, including the ones he had taken of Roby Yonge.

He said that he decided to "find a home for them" and established a Roby Yonge web site. He notes on the home page that his mother has told him that when she and her father showed him to Roby Yonge and his wife, Michelle, in 1971 at age seven weeks, Roby Yonge began to cry when he first saw his namesake, who would a short time later become his godson.
"He was a charismatic person who always had interesting stories to tell," Roby Sherman said on his interaction through the years with Roby Yonge.

"He was very personable and could engage in what I guess you would call social engineering," Roby Sherman said. "He knew how to work a room."

Roby Sherman said that during the four years that he has had the web site he has averaged about one e-mail a month from either friends or fans of Roby Yonge who wanted to say thanks for the memories or share a story about the Big Kahuna, which was Roby's nickname as he played the music of the surfer crowd during his years at WQAM.

He also was referred to as "a tiger" in some of the jingles from his early months at Musicradio77 WABC.

Roby Sherman said he communicates about once every six months with Roby Yonge's daughter, Lisa.

He said that although Roby never enjoyed as much success during his later years in Miami as he did during his time at WQAM in the 1960s and at WABC and WCBS-FM, he remained a popular figure in south Florida.

"There is a story about someone preparing to page Roby at an airport and a person who overheard the conversation said, 'You mean the Roby Yonge,' " Roby Sherman said.

Roby Sherman said that Roby Yonge should be remembered as a talented air personality.

"On his air checks, even from WQAM, he demonstrates a lot of spirit and personality," Roby Sherman said. "I can understand why he stood out."

"There is a lot of good banter in his air checks and he could do something that you so rarely hear today on radio, which is give a quick anecdote about the artists whose record had just played," Roby Sherman said. "He was like a data base."

"He also had the ability to talk up the instrumental introduction to the song and end his ad-lib right at the beginning of the lyrics," he added.

Roby Sherman said that Roby Yonge most enjoyed the Top 40 music from the 1960s that was being initially played during his rise as a major market air personality.

He recalled that Roby Yonge said in interviews well after his years in New York City, that he wasn't ready at age 25 for the celebrity and pressure associated with working at Musicradio77 WABC.

"He had the pipes and the bigger-than-life personality," Roby Sherman said. "I think, as he said in interviews years later, it was hard to be in your early to mid 20s and deal with the fame and recognition he had at WQAM and then have the hotels and limousines that were provided when he first came to New York to work at WABC."

"He also told me that he was a bit unsettled because the station's commitment to him kept changing," he added. "He was supposed to get the overnight shift, then there was talk of 4 to 7 p.m. and then the 1 to 3 p.m. shift only lasted for about a year. Then it was weekends and finally overnights. He said he was never sure of what was going to happen."