This section lists the dates and times the WABC Disc Jockeys were scheduled for airshifts on WABC from December 7, 1960 until May 10, 1982.

The lists are arranged by year. Whenever a change was made a new list is posted. Since WABC was amazingly stable for a Top 40 music station with respect to its air personalities, you will notice long gaps in time from one list to the next. This is simply a reflection of the lack of change at the station.

There are a couple of interesting things to notice as you go through the schedules:

In the early years WABC was really strapped with a great deal of ABC network programming. Don McNeill's Breakfast Club is the best example. It is easy to see why program director Rick Sklar was so happy on January 1, 1968 when he was finally able to stop carrying it!

For some reason, there was a lot of maneuvering of the midday shift at WABC. Before Ron Lundy took it over, it was done first by Charlie Greer, then Bob Dayton, then back to Charlie (when Bob was fired). Then, after Ron was there for a number of years both Johnny Donovan and Steve O'Brien took turns with unusually short shifts from Noon to 2:00 PM.

A similar situation existed from 10 PM to Midnight. This was another "short" shift which varied from from a one hour shift on up to a three hour shift over the years. Through most of this time, Chuck Leonard was the air personality affected by this.

The weekend schedules are interesting. As the years went by, the weekend airstaff traded shifts around much more than the weekday airstaff did. It is also important to note that most of those DJ's did the fill in work during the week when the "regulars" were not there. It is easy to get the wrong impression that people like Frank Kingston Smith, Johnny Donovan and Steve O'Brien were not on the air that much on WABC. In fact, the reverse was true. These guys were frequently on the air more than the weekday staff!

Special appreciation goes to Vince Santarelli of the "Apple Bites" radio newsletter for contributing these lists to the Musicradio WABC Website!

Schedule comments? Post them to the WABC and New York Radio Message Board!

Here are the lists:

And, from the memorabilia department, here is an actual schedule from 1968! This was given out to advertisers and anyone else who had an "official" reason for needing the complete program schedule (thanks to Jonathan Wolfert): 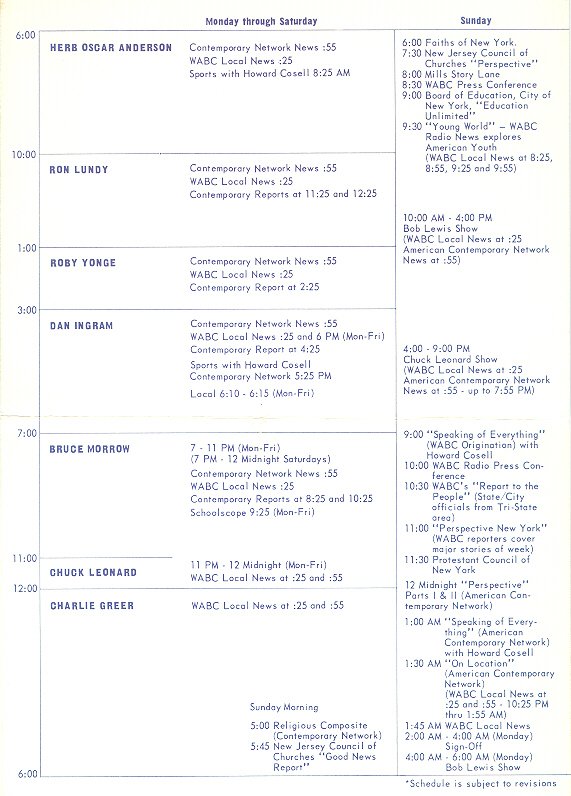 Here is the cover side for this schedule: 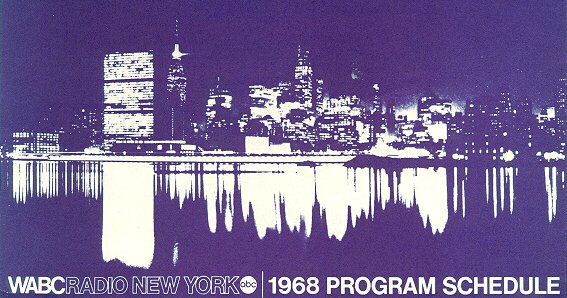