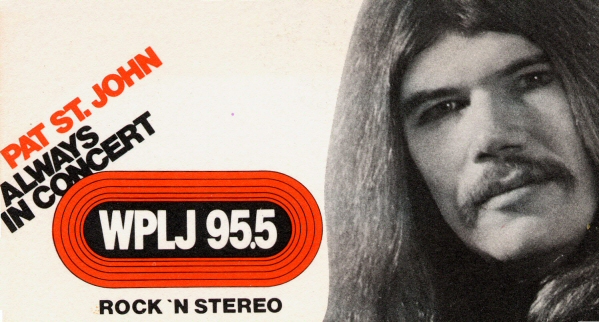 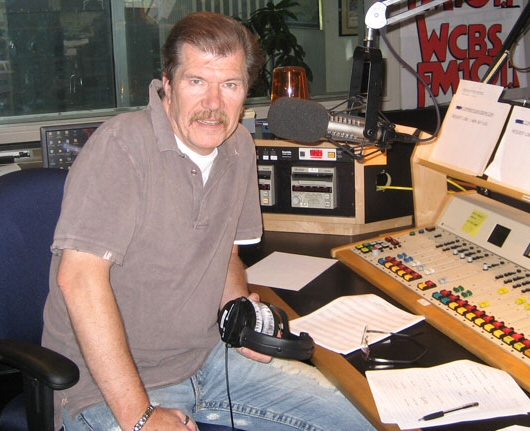 Pat St. John is well known to New York radio listeners from his days at WPLJ, WNEW-FM, WCBS-FM and WAXQ.
But... did you know he came close to becoming at Musicradio WABC DJ in 1974?

According to former WABC program director Glenn Morgan,
Pat was on the short list of candidates to replace Bruce Morrow.. something Pat didn't even know until recently.

When Pat was at WPLJ he created a series of music montages that helped identify the station.
They were clips taken from songs and then put together to spell "WPLJ", the DJ's names or other themes and slogans.
Among radio fans, these became the best thing around.
Eventually, Pat put them all together and called it "The Big Montage":

On a personal note, I've always considered Pat to be one of the all time great New York radio personalities.
From his time at WPLJ right up to today at Sirius/XM and WCBS-FM, he's got a great combination of radio talent and music knowledge.
He continues to be a great listen... and he's also got a great web site: PatStJohn.net

Pat St. John said that although he was born in Detroit and didn’t have the chance to listen to the famed WABC air personalities as he was growing up in the 1960’s, he “came to understand what they meant to people” after he started working on the same floor at WPLJ-FM  in April 1973.

Pat said he sometimes sat in the WABC studio with, among others, Dan Ingram, Cousin Brucie, Ron Lundy , Harry Harrison and Chuck Leonard during a time when Musicradio77 was the most listened to station in the nation and WPLJ was emerging as a force on New York City’s FM dial.

“It was his attitude and his sense of humor,” he said when asked about what has made Dan so successful through the years at the giant New York City station.

“Bruce is a very excited personality who is a genuine guy,” Pat said in a Sept. 22, 2008 phone interview with Musicradio77.com. “He also is very passionate about the causes that he is involved in.”

“Ron always had a spirit and was not only happy, but folksy,” he said of the mid-day air personality who spent 17 years at WABC. “What came across the radio was that he was a good friend.”

“Harry is a very thoughtful man,” Pat said of the former morning drive air personality who spent 11 years at Musicradio77. “I ran into him some time ago and he sent me a handwritten note saying that it was good to see me again and wishing me well with my return to CBS-FM. Imagine him doing that! He harkens back to another era. Family means a lot to him, and he has a big extended family of friends.”

“He was a nice guy who was always smiling,” he said of Chuck Leonard, who did late nights and weekends for 14 years at WABC.

Years later, Harry, Ron, Brucie and Dan all went on to long careers at WCBS-FM during its initial run as an oldies station. Pat also worked at the popular oldies station, even sometimes substituting for Brucie on the Saturday Night Party show.

“Good radio is good radio,” Pat said regarding the popularity of oldies stations over the last generation. “There was a place for that even with the changes in technology and the changes in music that led to the demise of music on WABC.”

“They continued to get better,” he said of the former Musicradio77 air personalities that later worked at WCBS-FM.

Pat said that he thought about moving to WABC during its heyday, and even submitted an audition tape when Brucie was preparing to leave for WNBC in August of 1974.

“I didn’t find out until many years later when former WABC  program director Glenn Morgan wrote an essay about Brucie’s leaving on the Musicradio77 Web Page that I was at one point under serious consideration,” he said of the night air shift that went to George Michael, who stayed for five years before embarking on a full-time career as a television sportscaster.

“Pat had great pipes (deep voice), had personality, knew the music and the artists, and had an ‘FM’ presentation style that was still energetic, all of which would help us fight the onslaught of FM,” Glenn wrote.

“Pat St. John was one of the most serious contenders, but we decided not to disrupt WPLJ’s growing success,” he stated in the essay.

Pat said that legendary WABC program director Rick Sklar cast him in the role of Brucie on the tribute tape that was played at Brucie’s farewell party on August 7, 1974.

He said he also got to know Glenn, who was elevated from assistant program director to program director when Rick took on the title of operations manager at WABC in the mid-1970’s, and took on even greater responsibility at Musicradio77 after Rick became a vice president with ABC Radio in 1977.

Pat had arrived at WPLJ from WRIF, the ABC-owned and operated station in Detroit, which also had adopted an AOR (album-oriented rock) format in the early 1970’s.

Pat said that even by 1973, FM was starting to have a profound impact on the New York listening audience.

“FM started to expand,” he said. “All of a sudden you had a long version of Light My Fire. It was amazing. FM was broadcasting in stereo, plus there were much larger play lists. It just sounded better, a higher fidelity. That was a real appeal to the audience.”

“I don’t find it difficult to make the transition between the three stations because I love all three formats,” he said. “Obviously I love the music of the sixties, I can play classic rock in The Vault and be more conversational like I was on’ NEW and ‘PLJ, and I have a great reverence for the blues, which I’ve always loved. The Blues is where rock’n’roll came from!”

He has been with the satellite network since its inception 10 years ago, signing up just after he left WNEW-FM.

“It was a revolutionary idea,” he said of his initial reaction to what has now become Sirius XM.

“The concept was ground breaking technology,” Pat said. “In this case, radio really is rocket science.”

He says more people are subscribing every day, in part, because of the enormous variety it offers.

“There are people who say that they would never pay for radio, yet they might purchase bottled water and cable or satellite TV. Most who do subscribe say it’s worth the price.”

However, he believes AM and FM stations will always have a big audience.

Since the FCC approved the merger of the two satellite services (with a combined 18.5 million subscribers), Pat believes the a la carte choices from Sirius XM will be beneficial to their listeners, as again, it delivers more choices.

Brucie has been doing a Wednesday night and Saturday night show at Sirius 6 (60’s Vibrations) since August of 2005.

Pat has been doing a Sunday show at WCBS-FM since it returned to playing oldies in July 2007.

“There’s so much more music in the library now,” Pat said. “Now we’re playing from 50 years worth of music. Back in the 60’s your play list spanned only about 10 years.”