The engineers handled the mechanical aspects of the show. They cued the records, played the jingles and commercials and handled the control board.

The disk jockeys were in a sound proof studio and were separated from the engineer by a glass wall. The two communicated through an intercom system fed through the studio mic when a commercial or song was playing. When the disk jockey was live on air he pointed to the engineer to cue him as to when to start the next program item which could be a song, jingle, commercial, previously taped contest or whatever else was to go over the air. 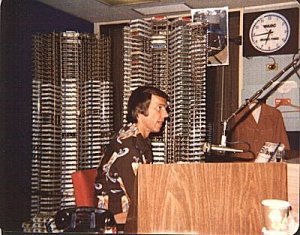 Dan Daniel on the air at WMCA taken from the engineers left. The control board is in front of him with two turntables to his left.

Most music was played directly off records, with only a few selections having been transferred to cartridge. The playlist for each hour was prepared by the program director and a package of records was provided for each air hour 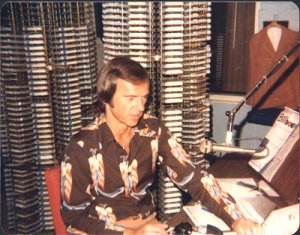 Another view of the engineer now looking to his right. He is cueing up either a commercial on a 16" record or one of the cold-chip acetate disks which were made at the station with cuts to be played during the news.The two right turntables are visible here and above them are the "carts" (tape cartridges). A cart player is located just to the right of the control board.

Notice the extra faders on the outboard chassis added to right side of the console. These were added for the tape cartridge machines, as all the regular faders on the console were used up by the turntables and mike inputs. You can also see the remote start buttons for the cartridge machines just to the left of these faders. These allowed the engineer to use one hand to adjust the level while hitting the start button with his thumb.

Every effort was made to keep a tight board. A push button was added on the DJ's desk which made a beep in the cue speaker. The engineer was to start the next record or cartridge on that beep (like a Pavlovian response) instead of a hand signal from the DJ, just to save some response time. For remotes like the Sunday afternoon show from Freedomland, a similar cue system was used which triggered a lamp in the control room with a subsonic tone on the remote line from Freedomland (only the DJs mike was remote, with all recordings played at the regular studio). 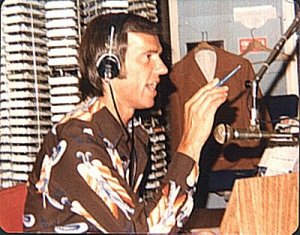 This picture was taken just over the engineer's right shoulder. Looking through the glass wall are air personalities Dan Daniel (l) and B. Mitchel Reed (r). This shot was apparently taken around 7:00 PM when Dan Daniel's shift ended and BMR's began. Note the door in the back on the left. Just above the engineer's head to his right are more cart players. 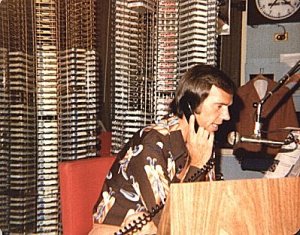 B. Mitchel Reed actually on the air at WMCA. The bank of telephones are on his left. Note both of his horns on the desk, the large one which produced the honk of an old-time auto, and you can also see the bulb of a smaller bicycle horn near the stapler. Just behind the mic is Mitch's pack of Gauloise cigarettes which always stunk up the studio. 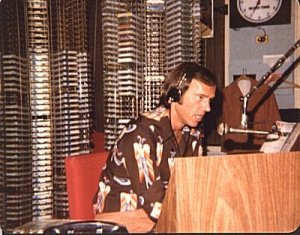 From the disk jockey side of the glass through the studio window from the DJ's side toward the control room. The engineer is Willy Callahan, who did B.Mitchell Reed's show evenings and was probably the best console engineer at WMCA at the time. There were two identical studios and control rooms for DJ work, but the one pictured was always used for on-air.

Tape cartridges were used for commercials, jingles, and funny bits like Bennys, and were kept in the custom-built racks seen here. 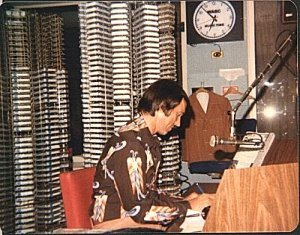 This is a view from the DJ's side towards the control room. One of the papers hanging from the clock says "Hooper Week" (ratings period). Willy Callhan is on the board. B. Mitchell Reed's back is toward us and his famous horn is on the desk in front of the stand that holds the copy book.