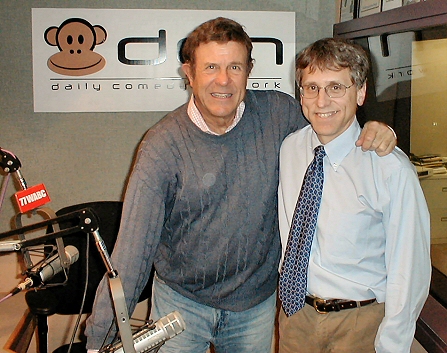 Allan Sniffen, the web master for Musicradio77.com, said that the most popular component of the Web Site is the Sound Files section, and that the number of air checks posted there has at least quadrupled since he established the Internet tribute to WABC in 1996.

“Most of the people who visit the Web Site are primarily interested in the air checks,” he said in a March 20, 2009 phone interview.

“A majority don’t read the academic items on the Web Site, which I wanted to have there to explain why the station did things the way that it did,” Allan said. “Some of them do. But I wanted that information there to provide a record of what happened and why things changed through the years.”

“The Web Site presented the audio, which was something that was difficult to do before the advent of the Internet,” he said regarding the most popular feature of Musicradio77.com.

Last year he transferred the air checks from Real Audio to an MP3 format, since it made it slightly easier for more people to listen to them.

MP3 didn’t exist when Musicradio77.com was established in 1996.

Allan said that “three-quarters” of the air checks that were initially posted were from his own collection of recordings of WABC shows as he was growing up, and from ones that were given to him by radio colleagues.

Between 1975 and 1990, Allan was an air personality at the campus stations at St. Lawrence University, KSLU and WSLU, in upstate New York and later worked part- and full-time, at commercial stations, including WSPK (K-104) in Poughkeepsie, N.Y.

“People would give me things,” he said. “It’s almost like a fraternity.”

“I had been into radio, and I knew computers so well that guys would bring them to me to fix,” he said regarding some of the skills he utilized to start the Web Site.

Even though Musicradio77.com was created during the infancy of the Internet, there were already some radio station tribute Web Sites.

“I knew there was an emotional attachment,” Allan said regarding the huge interest in WABC, which was the most popular radio station of the Top 40 music era of the 1960s and 1970s.

For example, he has long been a fan of legendary Musicradio77 afternoon air personality Dan Ingram, who he helped interview in May 2004 during the talk show that aired following the annual WABC Rewound, which features air checks of shows from WABC’s music era.

“It became bigger than I ever thought,” Allan said of Musicradio77.com.

Allan said Musicradio77.com averages 1,200 to 1,400 hits a day. He said that the New York Radio Message Board - a discussion area for current radio activity in the Big Apple, which he also operates - gets about 10,000 hits daily.

He said the traffic for Musicradio77.com has increased, partly because of the evolution of the Internet.

“Through the years more people have been directed there as [Internet] search has become more sophisticated,” Allan said. “Someone will search for Petula Clark’s song ‘Downtown’ and get directed to our site because the song is listed on the weekly surveys.”

Within about a year after establishing Musicradio77.com, he received feedback and in some cases material for the Web Site from such former WABC personnel as air personalities Frank Kingston Smith, Cousin Brucie, Harry Harrison, Johnny Donovan and news anchor John Meagher.

“If you attract interest from people with names that the public knows, it gives you credibility,” Allan said.

The late Bill Epperhart, a WABC engineer in the early 1970’s, and Jon Wolfert, who helped create some of the station’s jingles, were also among the earlier contributors of material for Musicradio77.com.

He said he was impressed that the survey guys – Ken Williamson, Tom Natoli, Mike Riccio and Don Tandler - assembled each of the WABC surveys through the station’s run as a music station from December 1960 to May 1982.

Within a short time, Musicradio77.com demonstrated the power that a popular Web Site can have on the mainstream media.

“The people at WABC have said that without the Web Site, there would not have been a WABC Rewound,” Allan said of the annual Memorial Day air check tribute, hosted by former Musicradio77 air personality Johnny Donovan, which was first held in 1999.

“I give Phil Boyce, the program director at WABC, and the general managers through the years a lot of credit for supporting Rewound and Saturday Night Oldies, because, really, when you think of it, there isn’t a lot of reason for them to be interested in what the station was like 35 years ago,” he said.

Allan said that he believes that Saturday Night Oldies, the four-hour Saturday night nostalgia show on WABC that is hosted by noted talk show host Mark Simone, grew out of the success of Rewound, the interest in Musicradio77.com and the demise of oldies on WCBS-FM in June 2005. WCBS returned to oldies in July 2007.

“Mark created something that was unique by doing the music of WABC’s day, the jingles, but also having interviews with celebrities from that era, which made it a nostalgia show,” he said.

“He’s extremely well-suited for Saturday Night Oldies, because he is an expert on that era,” Allan said.

On another topic, he said that in addition to Dan Ingram he has met several of the former Musicradio77 air personalities through the years.

Allan said that Johnny Donovan, who has worked continuously at WABC since the summer 1972, and longtime morning air personality Harry Harrison have stood out.

“Johnny is like a real person, since he’s a friendly kind of guy,” he said.

“Harry is so true to himself,” Allan said. “He is just the same as he is on the air.”

“So often you meet someone famous and they don’t live up to your expectations, which might not be fair to them,” he said. “But Harry is everything that you would expect him to be.”

As of 1999, Allan started posting a new photograph in the primary feature section of Musicradio77.com each Tuesday night.

It has become a practice for some of the more avid fans of the Web Site to access it each Tuesday night to find out what photo has been posted and if a new feature also has been added.

“We get the highest number of hits between Tuesday night and Wednesday night,” Allan said, noting the interest regarding what new items might be posted.

“With a Web Site, you have to keep it fresh, because if you don’t then there is no incentive for people to come back,” he explained.

Allan said that now that Musicradio77.com is 13 years old, he will only have to maintain it for another eight years to equal the time span that WABC was a Top 40 station.

He said part of the devotion by fans to WABC is due to the air checks making people “remember the good stuff from when they were growing up.”

“I still get e-mails from people saying that the Web Site allows them to relive their childhood,” Allan said.